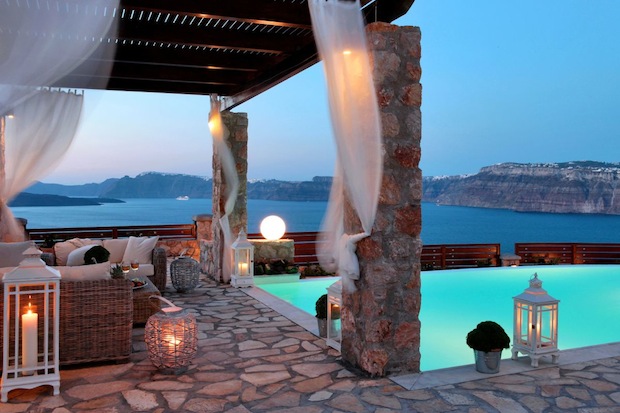 One of the most famous archaeological sites in the Aegean, due to the excavation of the prehistoric settlement of Akrotiri, this area attracts every year hundreds of thousands of tourists who can admire the ancient city, underneath a state-of-the-art bioclimatic shelter. Akrotiri is located in the southwestern tip of the island, at a distance of 15 km from Fira, while some of the interesting findings are exhibited at the Museum of Prehistoric Thera in the island capital. The first installations at Akrotiri date to the Late Neolithic period (4th millennium BC), while imported goods found on the premises during the excavations are a testament to the international commercial profile of its inhabitants, unveiling certified trade relations with Minoan Crete, Mainland Greece, the Dodecanese, Cyprus and even Syria and Egypt!

Today, among others, the visitors to the archaeological site can admire a large two-story building with 14 rooms on each floor, with interesting frescoes, a small building with a well-organized pantry, kitchen and laboratory space, and equally impressive murals, while four buildings that make up the complex D, revealed writings of the Linear A script. Also impressive is a magnificent three-story building, with sides lined with carved rectangular blocks of tofu, and murals depicting men in physical size climbing stairs.

Apart from the archaeological site, the lighthouse located at the westernmost tip of the island, just outside Akrotiri, is worth a visit especially at sunset. This is indeed one of the most beautiful lighthouses in the Cyclades, as it was built in 1892 by the French Society of Lighthouses and today stands at a height of 10 meters. The famous Red Beach in Santorini, a spectacular beach consisting of red rocks and sand, is also very near Akrotiri.

For more ideas on things to do in Akrotiri Greece, please contact FantasiaVillas.com.