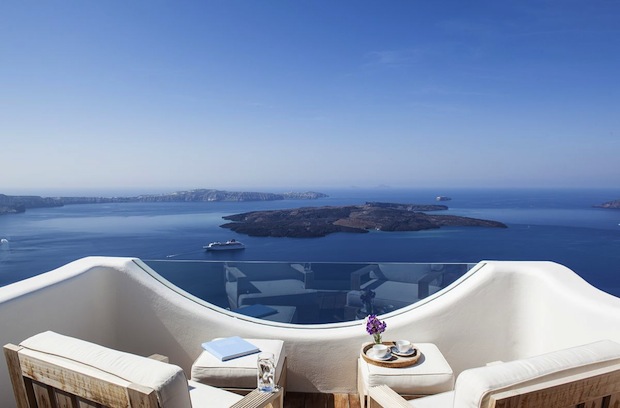 Amphitheatrically built on the edge of the cliff, this settlement overlooks the spectacular volcano, as well as the villages of Fira and Oia. Imerovigli is located just three kilometers from the capital of the island and attracts the most discerned tourists as it is home to some of the finest hotels, restaurants and bars. Visitors have the opportunity to tour the old path that connects Imerovigli with Firostefani and Fira, but also to admire the spectacular views over the Aegean Sea, from the highest point of the island.

Another interesting tour in Imerovigli involves the ruins of the Skaros Castle (Kastelli), the oldest castle on the island, built during the Late Byzantine period. From here the 360 degree view is spectacular especially at sunset. Today there are only a few ruins but in the past, the fort was connected to the main island by a wooden drawbridge and was densely structured. It is worth mentioning that Skaros Kastelli was never captured by the Turks nor the pirates, but was badly damaged in 1650 during the eruption of the Coloumbos undersea volcano.

The temples in the area of Imerovigli are also very interesting. Passing by the small square, visitors will marvel at the monastery of St. Nicholas, with its characteristic blue dome, whereas on the west side is the beautiful Theoskepastis church, which celebrates on the 26th of December, attracting locals and visitors.

For more ideas on things to do in Imerovigli Greece, please contact FantasiaVillas.com.